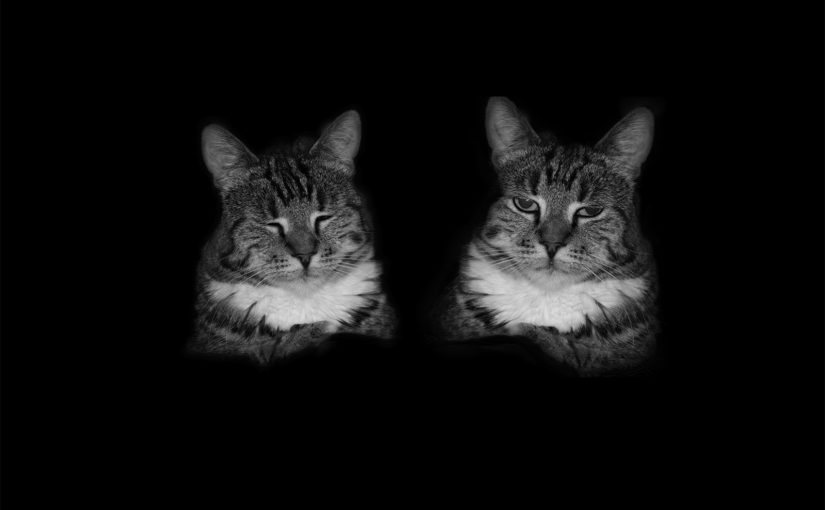 Roger has two rare polydactyl cats. He asked me to come over and take care of them while he went on vacation.

I want you and Gillian to have a great vacation. So don’t worry about your house or the cats. I’ve got everything under control.

Eric came over last night and after dinner, he and I decided to sample some of your fine Scotches, as you had kindly offered. So I want to thank you for your hospitality. Scully didn’t much care for Scotch, but Mully had a few licks and didn’t seem to mind it. So I gave her a little more and she climbed in my lap while Eric and I kept sampling.

After a while we decided to have a little game of toss-the-cat. We were sitting in the living room only a couple of feet apart, and we got her going in a nice little back and forth rhythm. She seemed to be having a ball, thrashing about and turning somersaults in mid-air. Then Scully came over to see what all the noise was about and Eric got a great idea.

He picked Scully up and tossed him over to me, while at the same time I tossed Mully to him. The cats crossed in mid-air and they could wave to one another as they passed at apogee. To get our timing right, we had to stand further apart, at opposite ends of the room. Scully was a little less enthusiastic than Mully, but wtf, don’t spoil the game, cat.

After a while, the ceiling started getting in the way, and we decided to move the game outside. So we took the last bottle out to the backyard. We kept moving further and further apart to see how far we could toss. By now, both cats were squealing with delight. When we got out to fifteen feet, though, they collided in mid-air and fell to the ground between us. I was able to grab Mully, but Scully jumped over the fence and into the next yard. Luckily, the Doberman that lives there chased him right back and Eric managed to tackle him, so don’t worry, he’s not lost.

We got back into cat-throwing position, but unfortunately, on the next toss, I put a little too much into it and Mully went sailing over Eric’s head. She hit the big tree back there and slid down the trunk, then scrambled back up and out onto a branch. She’s a really good climber!

She was sitting out there on that branch, maybe twenty feet up, and we didn’t know what to do. We tried throwing rocks at her to make her come down, but I think we only managed to hit her once and it didn’t work. Then Eric got another idea.

He found a piece of wire in the shed that you use for a workshop back there, and by tying a weight to its end, he was able to throw it over the branch that the cat was sitting on, near the base. Then we each grabbed one end and pulled it back and forth, until finally we managed to saw through the branch.  When it fell, it hit the workshop roof, but I’m sure it won’t cost much to repair the window and gutter.

Mully came down on the roof, too. We were able to pick her up with no problem after she slid over the gutter and fell to the ground, though. She seemed a little dazed, but don’t worry, she’s fine now. The vet says it’s only a mild concussion and the cast should come off in three weeks.

I hope you guys are having a great time. And tell Gillian not to stress over the home front: I haven’t missed a feeding and the litter box is clean.