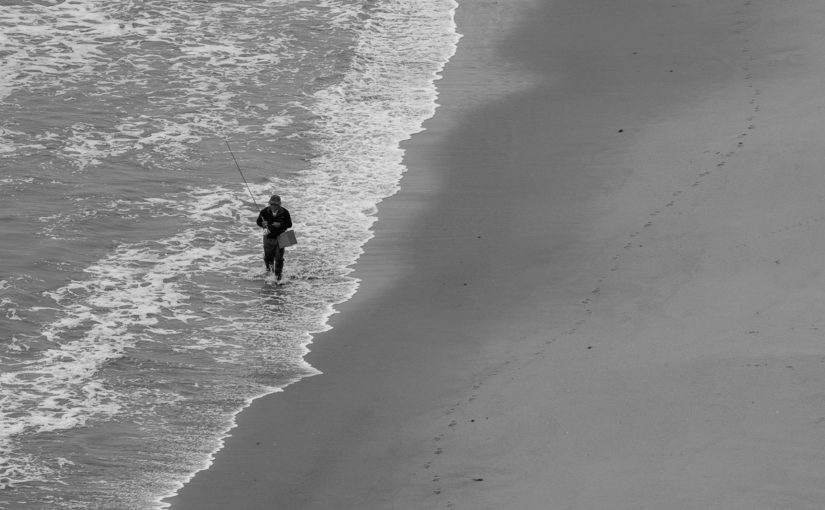 Today there was a fisherman on the beach.

I looked down on him from the bluffs as he stood there holding his long rod and facing the waves, right in the middle of Montara Beach. He was a tall, skinny character, wearing blue coveralls over a light blue sweatshirt. With red shoes and a white pail, he looked nicely coordinated. It was all topped off by a broad-brimmed canvas sunhat and punctuated by a pair of black gloves that drew my eye to his hands, even from a distance.

When he glanced up, I saw that a checkered bandana was covering his face. Only his eyes were exposed.

After standing there for some time without catching anything, the fisherman suddenly put down his rod, attempting to set his reel in his little white pail while balancing the rod on top.

He came running up the beach, waving his arms at a couple of seagulls ten or twenty yards away. Something about the way he moved his body made me think he was Chinese. He chased the gulls away from the body of a crab they had been dragging out of the ocean, and then picked the crab up himself, carrying it back to where he had left his rod.

I had expected him to put the crab in the pail, or to tear it up and use it as bait, but he did neither of those things. Instead, he just threw it into the sand where he’d been standing.

Then he spent a long time brushing sand off his reel, which had not remained balanced. After a while, he went back to the crab and buried it under a few inches of sand. Then he resumed fishing.

Later on, still having caught nothing, the fisherman decided to pack up and go home. He reeled in his line and picked up his little bucket. Then he dug up the crab. Using the same cloth he had used to clean his reel, he cleaned the sand off of it and put in in his pail.

And then he walked off, all the way to the north end of the beach.

I was glad not to be invited for dinner.