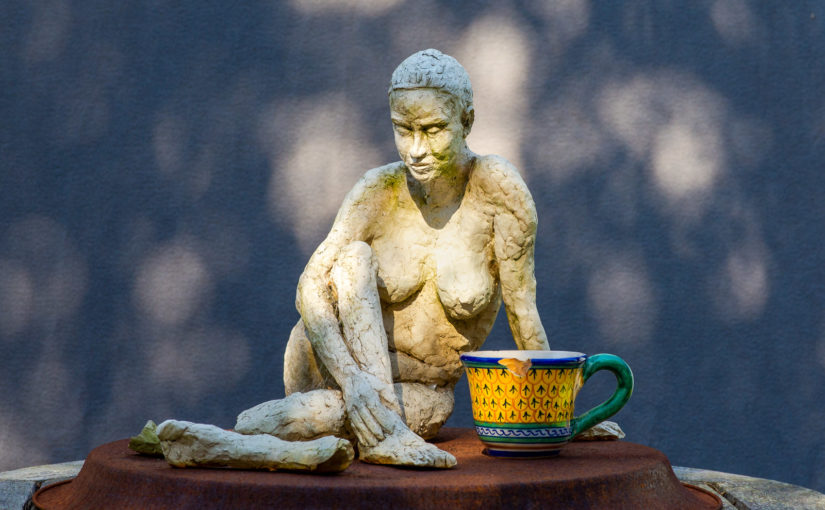 Today I mended a cup.

But I broke a cup two days ago, dropping it into the sink, and so there it was on the counter, the broken handle tucked inside. And I was bored, with nothing to do. There was plenty of glue on a shelf in the garage, including a nifty epoxy with special grips for precision dispensing. It was perfect for the job, and I now have a cup with intact handle. I am to leave it undisturbed for 12 hours. That won’t be difficult in this stillness.

But, as a way to pass the time, cup mending isn’t very effective. Only took about five minutes. I looked around for other things to mend but couldn’t find anything broken. Even thought about breaking a plate, but I was afraid there’d be too many fragments.

Parsimony appears to be one of the byproducts of cowering in place. We go to the store as infrequently as possible, half the shelves are bare, we come home with whatever we were able to find, and the instinct is to preserve it. Make it last.

Thus, I find myself eating half a candy bar, trying to save half my steak for tomorrow’s dinner, forgoing my afternoon coffee.

I feel as though I have been doing this all my life. It was the same when I was a starving student, a salaryman trying to pay a mortgage, an older worker looking to retire.

You’d think I’d be good at it by now.

Bob the Bird is back.

He announces himself every morning, chirping loudly outside my bedroom window. It is a happy sound, the kind of thing that makes you feel guilty for lying lazily in bed.

Bob is a finch, one of several who hang out at the very top of the pine tree in the back yard. They sit and watch the world from there, chirping their commentary. It sounds as if they’re laughing at us.

In those uppermost branches, the finches do not practice social distancing. They are not afraid of the plague, but it can get some animals, too. Today, I read about a cat who had covid-19 symptoms and tested positive. It is now recovering under quarantine.

Then I thought how come there aren’t enough tests for people, but they can test a cat?