To receive notification of new posts, please add your email address. I won't even share it with my cat. 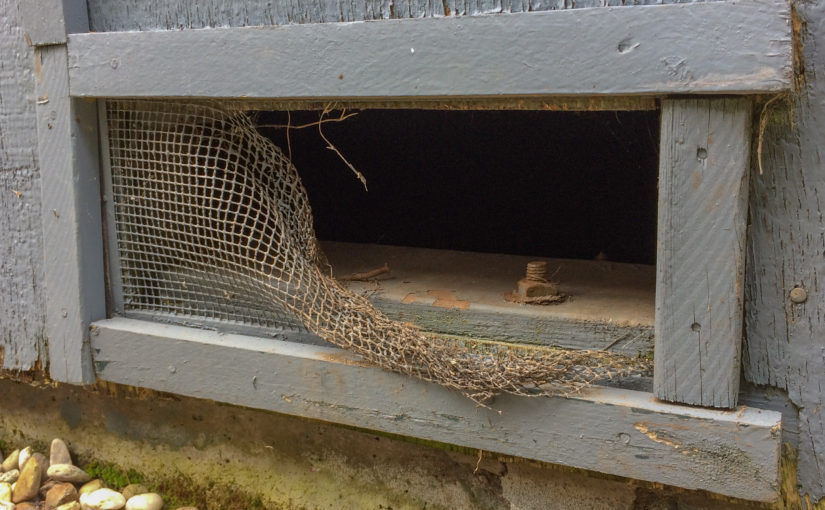 A raccoon is caught

One of them almost got in the other night.

This time I heard it coming, though, and although it was a close call, I was able to ward it off. Years ago, some kind of commando got in undetected, and once entrenched it was difficult to dislodge. This time, however, the attempted break-in was under the window where I sleep, and it woke me up. At about one in the morning, I heard a scraping sound. Listening more closely, there was a heavy, irregular grunt. Someone was trying to break in to the crawlspace under the house.

I had to fight to keep my pulse under control as I recalled the episode years ago, when another raccoon had managed to rip open one of the gratings. It had set up a nice little encampment under one of the bathrooms, and apparently enjoyed scratching its back on the underside of the tub, all the while issuing little cries of bliss. This interfered with my sleep, and eventually I decided I had to chase the thing out from under there.

This proved quite difficult to do. Seeking advice at Hassel’s Hardware, I was told to throw an ammonia-soaked rag into the nest. Raccoons don’t like the smell of ammonia and, although they can rip open steel gratings, they can’t figure out how to get rid of the rag. And so they leave, at least in theory.

On the strength of this, I bought a can of ammonia from Hassel, soaked a rag in it, and crawled down through the trap door leading to the space under the house. This was a dark place full of cobwebs and mud, and I didn’t like being there at all. It was unfortunate that the trap door where I crouched was located at the far end from the suspected raccoon nest, but I was unwilling to venture any further. Do your best, I thought to myself, somewhat ineffectually, and I balled up the rag in my fist and threw it as far as I could. This turned out to be about four feet, and it had no discernible effect on the raccoon population. However, I did ruin a shirt by getting ammonia on the sleeve.

After this foray into chemical warfare, I tried talking the kid next door into crawling under there with a broomstick, but he wanted too much money. Finally, I managed to get rid of the thing by applying the principles of physics: I left the trap door propped open, allowing free raccoon transit. Even with only one raccoon, the partial pressure of raccoons under the house had to be higher than the partial pressure of raccoons in the rest of the world (although not while it was sleeping, as its kinetic energy would then be zero).  By allowing the system to equilibrate, I knew that the little beggar would have to come out sooner or later (Dalton’s Law of Raccoons). After a few nights, the dogs next door alerted me that my tenant had gone out to forage, and I ran out to shut the door. The broken grating had been replaced by then, and so territorial integrity was finally restored.

Thinking back on that unfortunate episode, I realized that the present alarm had to be taken seriously. As much as I wanted to roll over and go back to sleep, I couldn’t allow this animal to break in and establish an outpost under my house. It was cold and I was warm in bed, but all good men must come to the defense of the premises (when threatened). I couldn’t just go back to sleep.

I got up and staggered down the hall in my underwear.

Somehow, I managed to find a flashlight and stepped through the patio doors out onto the back deck. I swept the yard with the beam, seeing nothing along the back wall. Then, near the shrubs, the bright glint of two eyes stared back at me. An animal with a striped tail stood motionless in the middle of the lawn, insolently sizing me up.

Unarmed men, this is a good time to point out, are not at their best confronting wild animals while clad only in their boxers. As the raccoon considered what to do, I tried to hold my ground. But I kept imagining razor-like teeth and claws, while thoughts of rabies also vied for my attention. Eventually, I said “Go away,” as forcefully as I could. I may have added, “please”. And the raccoon must have been impressed, because it turned around and disappeared into the darkness near the fence. After a while, I went back to bed.

It took a while for my heartbeat to slow down again, but finally I managed to get to sleep. Not for long, though. In a short while, the scratching resumed, as distinct as before.

Cursing, I returned to the patio door with my flashlight. This time, I caught sight of the animal slinking around the corner of the house. It was hiding in a narrow pathway bounded by high shrubs and leading to a latched gate, biding its time and hoping I’d go away. I was hesitant to corner it in this dead end, especially in my underwear, and so I needed an alternate plan. I decided to come around from the other side of the gate and try to flush it back out into the yard, hoping it would run away. I ran inside and put on a pair of pants. Then, feeling decidedly bolder, I grabbed a broomstick from the garage and headed around to the gateway.

Hoping the neighbors would forgive me for the noise, I started banging the stick on the gate. After a bit, I peeked between the boards with the flashlight, and sure enough, the raccoon had fled to the far end. It was in the main yard again and near the fence. Summoning my courage, and hitching up my pants, I opened the gate and advanced down the walk, while making a racket with the broomstick against the wall of the house.

My light caught the raccoon for an instant as it ran along the top of the fence before jumping into the neighbor’s yard. The dogs must have been sleeping, I guess, because they remained quiet. Feeling a bit disappointed by this, I stood there listening for a while. No hint of raccoon. So, I went back inside, leaving the broomstick by the patio doors, just in case this wasn’t over. And again, I tried to go back to sleep.

This time my nap lasted all of an hour. At that point, an even more raucous rasping awakened me from under the window. Once again, I cursed and jumped into my pants. Grabbing flashlight and broomstick, I threw open the patio door and stepped outside. This time the raccoon had made enough noise to rouse the dogs, and they were barking furiously next door. I decided to add to the commotion by raking the broomstick on the metal patio chairs.

In the midst of this commotion I found the raccoon with my light, near the side of the house. It froze in the beam, clutching the end of a piece of metal grating it had half torn from the wall beneath the window. From the looks of things, it had just now succeeded in making the opening large enough for a raccoon to pass through. Dalton’s Law, I realized, now favored its ducking inside.

But Dalton’s Law is based on statistics, the probable motion of a population of raccoons. It further assumes that this motion will be random, and that the raccoons will be infinitely tiny point-raccoons. Here, however, was a single instance of a raccoon poised to move in a non-random manner. Statistically anomalous outcomes were imaginable. For a moment, the animal hesitated, and I wondered as I banged on the chair. Would it climb in through the hole and try to hide, or would it panic and flee the racket I was making together with the dogs?

Finally, the commotion proved too much for it, and the raccoon turned and vanished under the ceanothus and over the fence in the corner of the yard. They have a dog over there, too, but it’s a little froufrou thing with bows that wears a sweater whenever they walk it. It’s not the kind of dog that confronts a raccoon. Not without a pair of pants.

The next morning, I was out in the back replacing the torn grating. In a way, I felt bad for the poor raccoon. It had put in a whole night’s worth of hard work pulling the screen out from its metal frame, cleverly working on the weakest part of the design, only to be thwarted at the last moment.

After a while, Frank came over and said hello. Frank is my neighbor and he’s even older than I am.

“Was that you out here last night with a flashlight?” he wanted to know. “I was watching TV and I saw a light movin’ out here.” Frank is a good neighbor and a vigilant insomniac. He has a sharp eye for burglars, but not for raccoons. He might be a bit hard of hearing, as well, because he didn’t mention the banging.

“I was gonna call the cops, but I figured a burglar wouldn’t be using a flashlight,” he added.

The use of felines to repel raccoons is recounted here.