A personal encounter with an arachnid 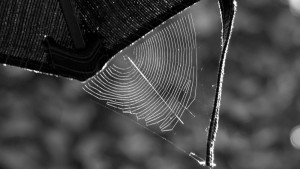 I was sitting at my desk the other evening when a spider the size of a small bus walked across it. I had no idea where it had come from, for it looked like the king of all arachnids compared to the skinny little white things that normally inhabit the room. Spiders don’t bother me, usually, except that once I read a story by E. Annie Proulx about a guy in Texas who puts his foot into his shoe and gets bitten by a small brown spider inside. This guy gets real sick from the bite, and his wife has to nurse him back to health. Then, when he’s finally starting to recover, he gets bitten by another spider and he dies. End of story. He’s not gay, that was another story. Anyway, I beheld the present spider with a measure of respect.

I once read that most spiders don’t bite people because their jaws are too weak to break the skin. It’s not that they don’t want to. I didn’t think that the present specimen would have much of a problem, though. It looked capable of breaking my finger. It didn’t help that it was shiny and black, like the creature in Alien. Or that it kept pushing books and ashtrays out of its way as it purposefully worked its way across the desk. Although it seemed perfectly willing to ignore me, I realized I had to do something get rid of it. I couldn’t sit and work, wondering where this thing might be lurking. Since it was way too big to squish with my finger, I ran shrieking stepped nimbly from the room in search of some appropriate anti-spider implement, like a broom, or a shotgun.

I returned a few minutes later carrying a knotted kitchen towel, which I intended to swing with devastating effect. As an emergency backup, I also carried one of those kitchen torches that are used for baking, but I really didn’t want to use it because the desk is made of wood. In college, we used to make torches by spraying deodorant through the flame of a lighter, and Steve Goldstein used one to burn his initials into the wooden door of his room. I didn’t want scorched initials on my desktop, or squashed spider entrails, either, but it didn’t matter because I couldn’t find the beggar anywhere when I came back in.