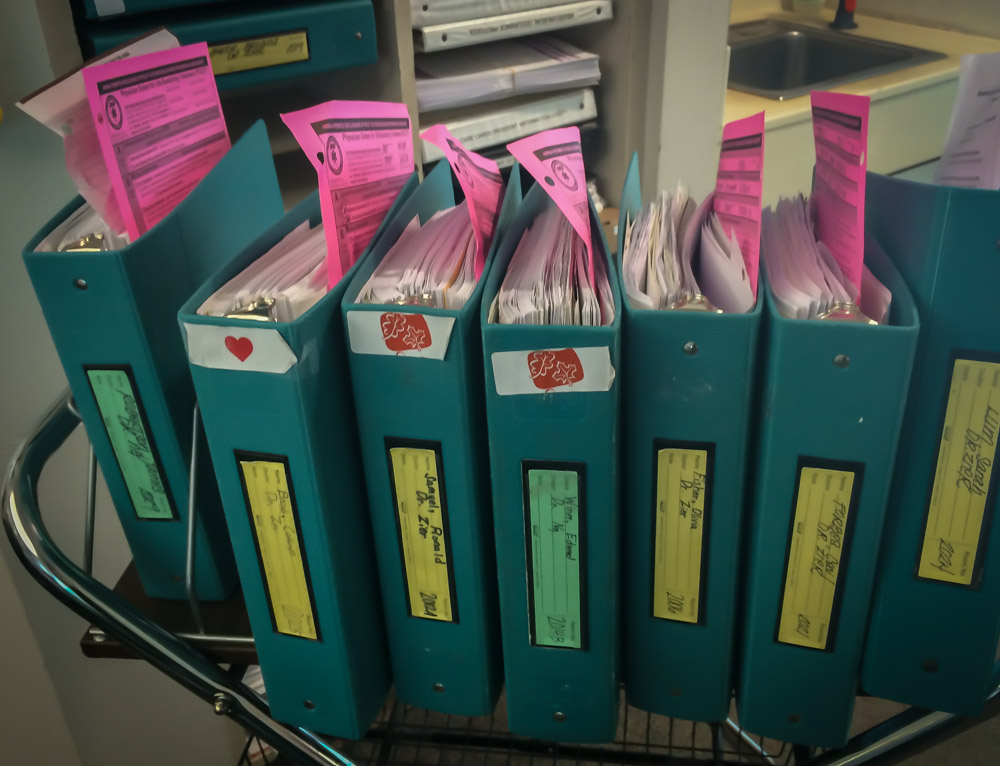 As you walk past the nursing station you see them. The patient binders. They contain medical records, test results, insurance papers, the documents describing these failing bodies. And in each one a sheet of red paper, the advance directive. Instructions to follow in case of a critical event. The name of the party responsible for making these decisions if the patient is unable. Last week, that was you.

There are three questions on the page. Should the heart be forced to beat if it stops? Electric shock. Massive pressure. Should a breathing tube be inserted if the patient cannot breathe? Should a feeding tube be used?

You had discussed this in the past of course, the two of you, as you filled out these papers. An abstract exercise. There was agreement: no heroic measures. But a grey area, as well: if there is a chance of recovery, a normal life, maybe then…

Last week it became terribly real. She lay there babbling, unable to respond. 911. You followed the ambulance to the ER. They told you to send for your kids.

You already knew she had metastatic cancer. At first the chemotherapy had seemed to work, granting a brief reprieve. Then the tumors came roaring back, causing blood clots and a previous trip to the ER. She had just started treatment with a new class of drugs, only a few days before. No time to evaluate its efficacy. Now a tumor was blocking one kidney, causing infection and sepsis. A blood clot in her lung. Should a breathing tube be used?

The staff in the ER clearly didn’t think so. She has metastatic cancer, they repeated. But what did they know of these new drugs? They were not oncologists. In this era of medical specialization, they read the newspapers just like you to learn that immunotherapy had provided miraculous results, for certain cancers. No one knew if it would work for this one. But it was up to you to decide.

And you decided that she deserved a chance, one last opportunity to fight this thing after so many years of pain. To claim a few years of the retirement you both had planned on. So the breathing tube went in, and later the feeding line as well. And you watched as she suffered some more.

From the ER to the ICU. From the ICU to a regular hospital bed. From there to a skilled nursing facility, where the folders sit at the ready. Had it been days or weeks? There was no tracking the time. People came and went, friends, relatives, the kids. Confined to her bed, she tried to hide the pain from them. But you could always see it there, as you asked yourself if you’d done the right thing or if you’d simply been selfish, unwilling to lose her, unprepared for the enterprise of death.

She would never tell you if she thought you’d been wrong. Ever generous, even now she is careful not to burden you with guilt. She thanks you for being there, calls you her rock. But you wonder if, late at night when she is alone and hurting, she curses you for what you have done.