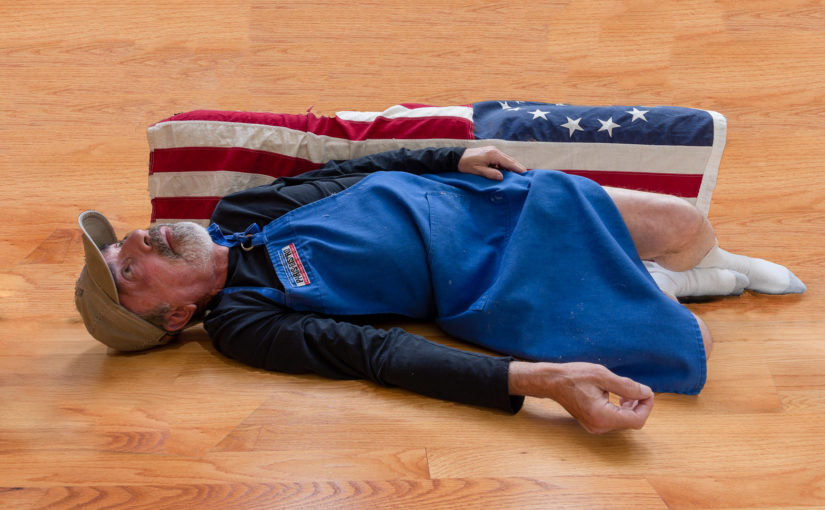 A tangled tale of apronology.

Hi Dianne — I decided to cook today (beef goulash), but I keep having trouble with my apron. It’s a blue French apron with strings that go behind my back, and every time I every time I try to tie them together back there, the knot comes loose. I fiddled with it all afternoon, until finally I managed to twist something into place that held. But it was a bulky contortion, at best.

When I got done cooking I tried to reach back there and get the knot untied, but it kept snagging, and I found that I couldn’t get the apron off. After a bit of this, I lost my temper and pulled at it real hard. Unfortunately, this just made matters worse, and now the thing is frozen into a knurl that is harder than a rock. I’m stuck in my apron. You’re out of town and Eric is in San Jose, so I have no one I can turn to. Do you think I can go next door and ask Frank for help? I don’t want to look silly.

Hi Dianne  — I couldn’t use the hot tub last night, and I had to sleep in my apron (Frank wasn’t home). I was up all night because the knot kept digging into my back. At least I didn’t have to worry about drooling.

But Eric is coming over this afternoon, so everything should be okay. He was a Boy Scout.

PS – Will paprika stain my sheets?

Well, Eric came over today but he wasn’t able to get the knot out of the apron. The canvas straps are stiff, and they’ve been pulled on so much since yesterday that he couldn’t get them to slip at all. He even tried prying it with a screwdriver, but the blade wouldn’t go in.

So, he called up his friend Peter. Peter works at Sam’s Crab House, and he knows a lot of people. It turns out that one of them is an apron specialist. Peter was sure he would be able to help. “Miguel knows all about aprons.”

We headed over to Sam’s.  Miguel must have been busy with other apron victims, though, because we had to sit in the waiting room for quite a while before he could see me. Apron removal specialists are in high demand, I realized. The waiting room at Sam’s is furnished with a long bar and comfortable stools, and Eric and I were sitting there patiently when Miguel’s assistant, his brother Juan, came out to collect his co-payment.

So I bought another round, and we waited a while longer. Finally, Juan ushered me into a bustling, cavernous kitchen that doubled as both an apron exam room and an OR. There, I met Miguel. A large, ill-shaven man of about fifty in flannel shirt and soiled trousers, he was wearing a black apron of his own. This gave me pause for a moment because I had been expecting the white coat of a clinical apronologist. But Miguel seemed to know what he was doing. He examined the knot with the confident air of an expert.

“Not a problem,” he announced, after some study. Then he went off to get an apron removal instrument, a “navaja” is what he called it. Figuring that this was some sort of specialized device available only to professionals, I began to relax, confident that I was in good hands.

But I grew alarmed when Miguel returned wielding something that looked like a butcher’s knife. And even more so when he raised it over his head and tried to grab at my apron. That’s when I screamed and started running around the kitchen, with Miguel chasing me and everyone else trying to get out of the way.

Juan positioned himself in front of the door, blocking my exit. “The boss gets upset when we chase patrons through the dining room,” he explained. I turned around and ran the other way.

On my third vault over the steam table, however, my toe caught on the edge and I ended up crashing to the floor. Miguel was on top of me in a flash and, with the help of Juan and several others, he held me down and performed the apronectomy.

It probably would have gone better if I had struggled less. There would have been less collateral damage. As it was, the EMTs gave me two units of blood and I’ll probably get released tomorrow. I’m wearing a hospital gown right now, but they told me the apron is in the plastic bag with my clothes.