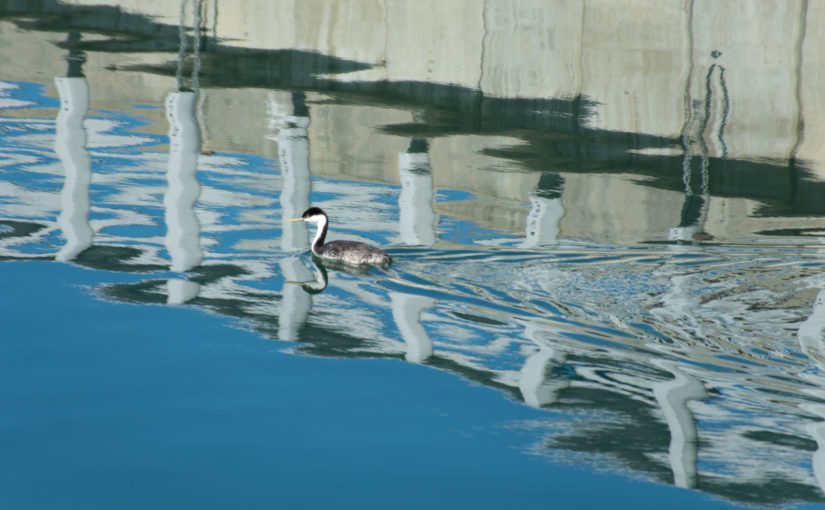 As part of my naturalist training at Fitzgerald Marine Reserve I was asked to write a paper about one of our local marine birds.

That is to say, I am a member of the order Podicipediformes, from the Podicipedidae family. Our family includes 22 species in a half dozen genuses, but if you see one of us on the Coastside, chances are it’s a Western Grebe, like me.

My ancestors appeared in the fossil record 25 mya, during the late oligocene. We diverged, at that time, from our cousins, the flamingos. We know this from studies of our DNA and anatomy, which have shown that we have genes in common with flamingos and share eleven morphological traits. Birds cannot count to eleven, though, so I am unable to tell you what those traits are. But we grebes are not proud of the flamingo branch of the family. The Podicipedidae would never be burlesqued as pink lawn statuary. And then there are those ugly flamingo feet. More about feet later.

I am a 2 kg waterfowl with ducklike build, black and white markings, a yellow bill and bright red eyes. Some of my cousins, like the pied-billed grebes, have evolved thick bills that can be used to crush shellfish, but mine is long and sharp and is used to spear small fish. My lifespan is 3-4 years. I want to make every minute count.

The name Podicipedidae means “feet on ass”. It sounds better in Latin. But that’s what I have: big, beautiful, flat feet. They are well adapted for swimming, which is what I use them for, since I don’t walk on land very much and they don’t help at all when I fly. They don’t help that much when I walk, either, because they’re placed so far back under my belly that I keep falling over like a drunk.

You will notice that my toes are in the shape of rounded lobes, another helpful swimming adaptation. Because of this, people used to think we Grebes were related to the Loons. Nothing could be further from the truth. Loons are boring birds, they’re all from Canada, and they can’t build a proper floating nest. But it turns out that they evolved lobed feet independently of the grebes. It’s an example of convergent evolution. Of course, the Podicipedidae did it first and the loons just copied. Happily, grebes and loons are now classified separately, in the orders Podicipediformes and Gaviiformes.

In addition to my feet, you may wish to admire my feathers, which are beautiful and functional. So beautiful that you idiots used to hunt us to make hats with them. (They are quite tasty, too, and I often eat them while I am preening. I like to give some to the new hatchlings, as well. You can never get enough fiber.) We Grebes have unusual bottom plumage that sticks straight out from the skin, bending backward to form a dense covering that traps air under the body. By flexing the feathers we can adjust our buoyancy. We can even swim with our bodies submerged and just the head and neck exposed. I’d like to see a loon do that.

In the summer, I put on my fancy mating feathers and go out looking for girl grebes (grebe cruising). This usually involves an elaborate mating ritual during which my honey and I caress each other with pieces of seaweed held sensuously in our bills (grebe foreplay), after which we rear up and charge across open water together and then dive in (grebe synchronized nuptials). A loon would be too tired to mate after all that. A clutch of 3-4 eggs is then laid (grebe consequences) and must be incubated for 24 days.

Anyway, you guys won’t get to see any of  that, because we grebes don’t mate on the coast. I just crash on the beach out here during the winter months, and then I migrate home for the summer to mate. Who needs the fog, anyway? My real home is a mound of twigs floating in the middle of a fresh water lake near Livermore.  (We have a view of the trailer park.) It took us 3 days to build and it floats out on the water, so the eggs are away from predators, not like the dumpy loon nests on the shore. After the kids hatch, they ride around on our backs for a few days ’til they learn to fish for themselves. Then I can come back to the coast and chill.

So we grebes are short-term visitors from over the hill. Some of my fishing buddies fly in from Oregon or the Sierras. Here’s a map of the places grebes hang out. Not all of us winter near the ocean, by the way. Many older grebes enjoy their retirement year in Mexico’s warmer climate (snowgrebes).

Like other tourists, grebes come to the coast for the water sports and seafood. I enjoy paddling around the harbor, diving, and spearing anchovies with my beak, though occasionally I’ll take a break from that and eat a crustacean or some insects.

I am not pressured very much by predators when I am out here on the water. The local raptors get plenty of field mice on the farms. If one becomes interested in me I may dive underwater to escape it, sometimes with a dramatic splash. A grebe is most vulnerable to predation while it is still an egg.

But all is not completely well in Grebeland. Our population is thought to be in decline. This may be due to pesticides, fishing lines, boaters disturbing our nesting colonies. On the coast, we are vulnerable to oil spills and netting.  It’s not easy being grebe. So please do what you can to protect our habitat. Leave the french fries, not the wrapper.

And thank you for your interest in grebes.