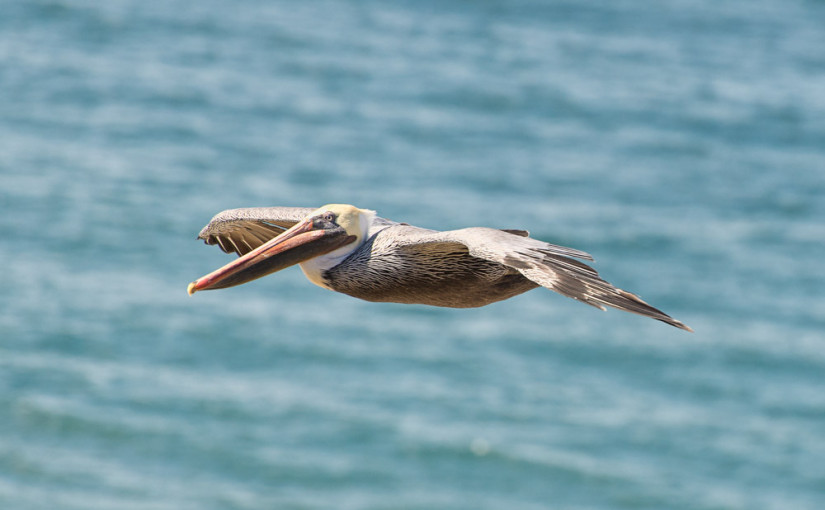 Let’s discuss shooting flying birds. Not with intent to kill, but rather to immortalize. Moving objects are hard to photograph, and birds are among the most difficult. They’re quick and unpredictable, but with a systematic approach and some advance preparation superior results may be achieved. At least, such was my belief as I set out recently to photograph members of our local shore bird community.

I usually have some idea of the shot I want when I go into this sort of thing, a background and a valiant posture for the bird. This ideal is never realized (birds don’t cooperate), but it’s a place to start. There are a couple of things to keep in mind.

First of all, the best shots are taken from positions level with the bird or above it. This lets you get the head and plumage, though it may require climbing to high places. Shots taken from below, of a hawk’s belly, for example, are less valiant. An alternative to climbing is to photograph shore birds, as they often fly low over the water. You can just climb on a jetty. Another thing to keep in mind is that better pictures are obtained with the bird moving toward the camera rather than away. As with any subject, this offers the opportunity for eye contact, and birds have wonderful eyes.

Around here we have pelicans, leathery looking creatures reminiscent of pterodactyls, and I wanted to photograph them as they fly along the coast. I imagined a shot in which a flight of three or four, in chevron formation, fly toward the camera with blue sky, cliff face, and a small inlet, slightly off-focus, in back. Pelicans like to fly along the coast in groups, sometimes high, along the cliff edges, other times skimming the water. Do they fly loops? Low in one direction while fishing, then return on high to start again? I had tried to consult wildlife experts but found only the kind who tell you that pelicans eat fish and like to winter in Baja. I’d like to winter in Baja too, but I wasn’t about to go there for these pictures.

Still, despite my limited knowledge of the birds’ personal habits, I felt I was well prepared for my outing. After all, I had a Pretty Big Lens.

Since it is quite difficult under most circumstances to get close to a flying bird, the occasion called for a telephoto lens, one of at least 300mm. Not only that, but due to the unreliable nature of the subject as well as the distances involved, it was likely that extensive cropping would be required, so that a camera of many pixels was needed. I had a Nikon D600, 25 megapixels, with a 70-300mm zoom lens that is f/5.6 at full extension. Not too heavy at 3/4 kilo. It’s an old lens and the autofocus is slow, but I felt it would be equal to the task.

A better choice would have been the 300mm f/4 E PF VR. Faster autofocus and an extra stop of aperture in a prime lens. I seldom use zoom for these shots, anyway, just the maximum magnification, so it would make perfect sense, and it weighs the same. But it costs two grand. For a while I coveted the 80-400mm AF-S, desirous as I was (still am) of the greater focal length. It has fast autofocus but  weighs about 1.5kg, which is a lot for a weakling like me to swing around at birds all day. Nikon’s 400mm primes all seem to be f/2.8, weigh twice as much as even that, and cost the equivalent of several house payments. Interestingly (if not usefully), Canon makes a 400 prime at f/5.6 for 1200 bucks that weighs 1.25kg. These lenses all have vibration reduction systems. Turn them off, they’re useless at very fast shutter speeds.

Most cameras now have some sort of predictive autofocus feature, which tracks a moving subject and anticipates where it will be. You point the spot at the bird and then half-press the shutter button, and the camera stays focused while you shoot away in continuous shutter mode. But you do have to keep the camera pointed at the bird, and birds tend to revise their itineraries quite suddenly and without notification. If (when) the subject flies completely out of frame, there often ensues an interval wherein the photographer flails about wildly, the shutter button fully depressed, recording frame upon frame of empty sky while searching for his lost bird. At such times, it would be preferable that he release the shutter completely, re-engaging it only when the errant avian has been rediscovered, for the autofocus requires resetting in this manner. Unfortunately, such poise may prove beyond him. 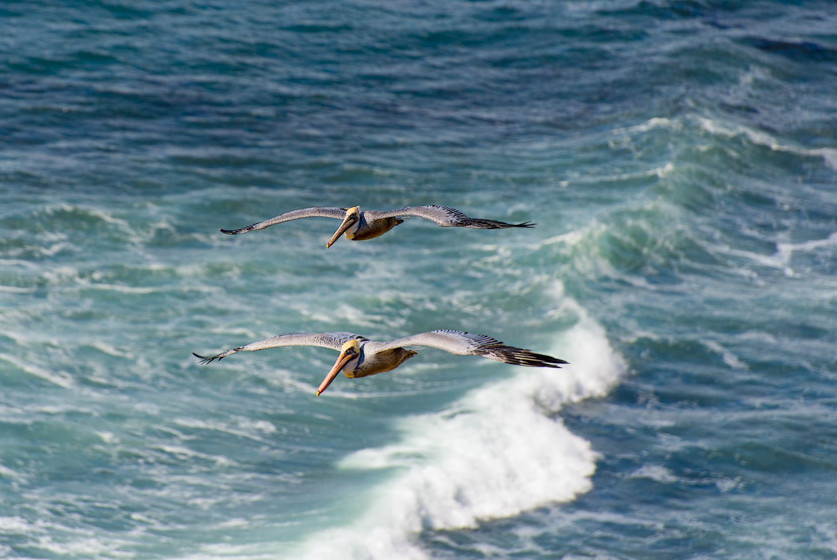 I headed down the coast south of HMB, where the road runs along the top of the bluffs and you often see flights of birds. Having scouted a couple of locations with promising background views and comfortable seating (a rock or patch of dry dirt), I was arriving at a time of day when southbound birds should be well illuminated. That much was under control. But you can’t trust the goddam birds.

Photographing things from the tops of cliffs entails certain intrinsic hazards. You should be careful not to fall off. Unless you have someone willing to hold onto the back of your belt (someone you trust), it’s safer to be seated than standing. Do not ever attempt to shoot down toward the water while looking through the viewfinder if you are standing. Get prone. And use a camera strap.

At my first location, there was a small bay to the north, where the birds were supposed to come from. A little mist and a strong morning sun. I decided to set the exposure manually, since the light was steady. To stop motion, a very fast shutter speed is needed, at least 1/1000. Never mind panning, you’re going to be swinging the damn camera all around just trying to keep the stupid bird in frame, anyway.  You have to expose for the bird, and not for the background, so I took a test shot in P mode of some pelican-colored dirt for reference settings, and ended up with 1/1250, f/5.6 at ISO 720. I consulted my depth of field calculator and concluded that the bay and cliff in the background would be nicely out of focus if I caught the birds coming toward me at about halfway. I even took a reference shot of a grey card, because the auto white balance would be guessing anyway if there is only blue sky and red cliff in the picture. I had it all figured out.

I sat down on the packed dirt at the edge of the bluff, carefully watching the cliff face to the north, and waited for the stupid birds.

Later, at a spot further down the coast, small white clouds were blowing across the sun on a rising sea breeze. I had come here because at the first spot the birds were all flying the wrong way. First I had seen a group offshore, low over the water. They were headed in the right direction, but too far out. Then, abruptly, five of them burst from behind me, ten feet overhead. Frantically, I shot pelican ass pictures as they receded to the north. It was not what I had been hoping for. I soon realized that all the southbound birds were over the water, and all the ones up where I stood were headed north, with the sun inconveniently right behind them. There was a system to these flight patterns, and I was not going to see southbound, cliff height pelicans there this morning. I don’t know what governs these patterns: wind, feeding, or time of day. At the second stop, though, I got luckier.

At the foot of the bluff down below me, a group of large boulders protruded from the surging tide. There was another bay, with a smaller cliff across from me. And there were birds! As soon as I got there, a flight swept across the bay at cliff height, swooping down among the boulders and back up the cliff face before disappearing down the coast. 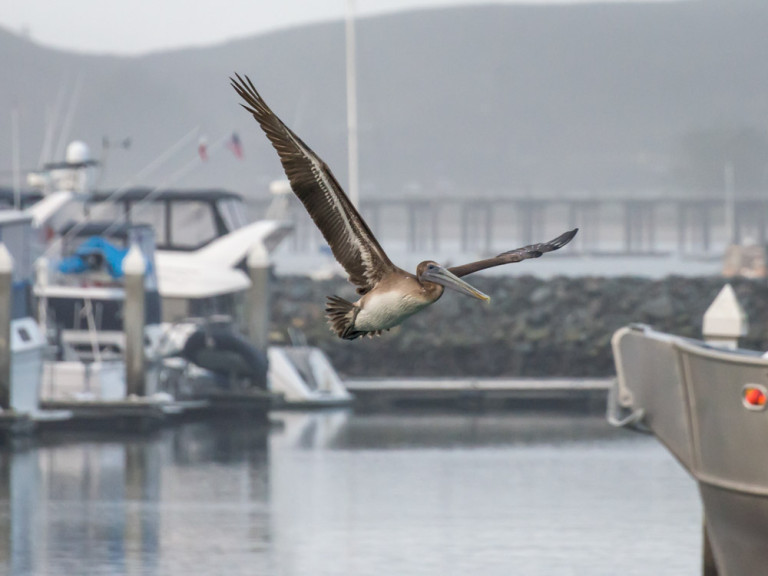 I wanted to shoot them flying up toward me, rocks and surf in the background. This would be tricky because, when they are low, the autofocus can lose them and lock onto a rock or something. The background is too close. But, you have to try.

Since the light on the birds would be variable, I decided to set the exposure with the spot. In shutter priority at 1/1250, I let the ISO float with an initial value of 100. This causes the shutter to open first, then the ISO adjusts until the exposure is correct. Basically, at these shutter speeds, you’re always shooting with the lens wide open. It’s worth noting, if you are shooting a flight of several birds, that you want the lead bird in focus, and it’s hard to control which one the autofocus latches onto. A lens with shallow depth of field will be harder to manage, despite the lovely bokeh. 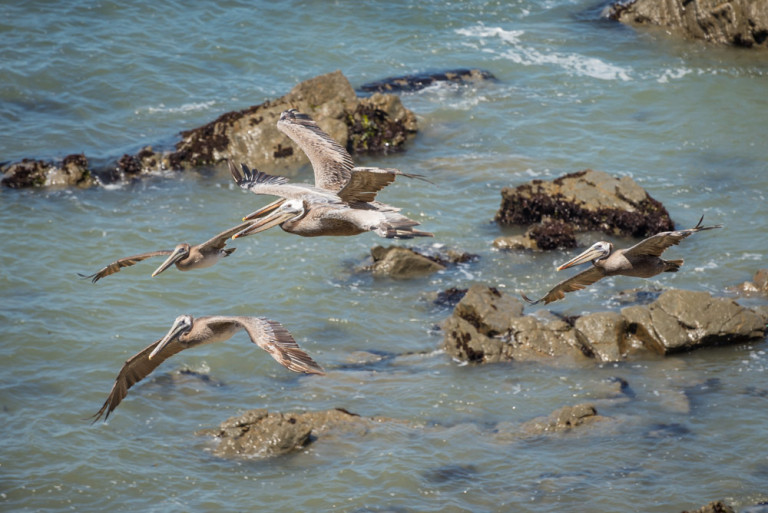 And then I sat and waited for the birds some more. I was well prepared with candy bars, a drink, some weed, and music on the mp3 player. Now and then a flight would suddenly appear, and just as quickly be gone.  I held my camera constantly ready,  vigilantly watching the direction from which they were flying. Then shot away like mad for a few seconds until they disappeared.

It is the nature of this type of photography that you go home with a thousand exposures, and count yourself lucky if even ten of them have any value. So the first challenge in post-processing is triage. A couple of things can help with this. If your camera has a setting that prevents shutter release when the lens is unfocused, use it. Many of us override it, thinking that even our out-of-focus shots must have artistic merit, but in this case that may be a poor choice. Also, in Lightroom, you can use the auto-stacking function to group exposures taken within, say, 5-second windows. This should group the bursts of shots taken of a particular bird or group. While it doesn’t really save time, it does break the task up into more manageable pieces.

Shots taken at high ISO can display luminance noise, particularly in shadow areas. You can usually get this out in Lightroom. Another common issue is sky color. If you expose properly for the birds, the sky, especially on overcast days, may be blown out. One approach, in Lightroom, is to add blue globally and use the Adjustment Brush to paint over the bird. (There’s a good summary of Lightroom sky fixes here). If this doesn’t work, take the image into Photoshop and make a selection of the sky. A useful trick for selecting is to work in the blue channel, which should offer the most contrast between the sky and the rest of the image. Now add a blue photo filter, gradient, paste in another sky, whatever.

Birds are strange creatures. Pelicans, in particular, seem to treat photographers with contempt. In the harbor, they sit on pilings and watch disdainfully as I approach with my camera. They don’t like me, and finally hop away, but I can get all kinds of pictures of them on land. It’s easy. Shooting them in flight requires a little more coordination. And luck. Some day, maybe I’ll actually get one of those idealized images I set out to shoot. Who knows? In the meantime, I’ll have to settle for the near-misses and the occasional serendipity. But that’s all right. After all, better one in hand than two in the bush.

For more photos of coastal birds, check out this gallery at Pillar Point Posters! And here is an article on photographing hummingbirds in flight.