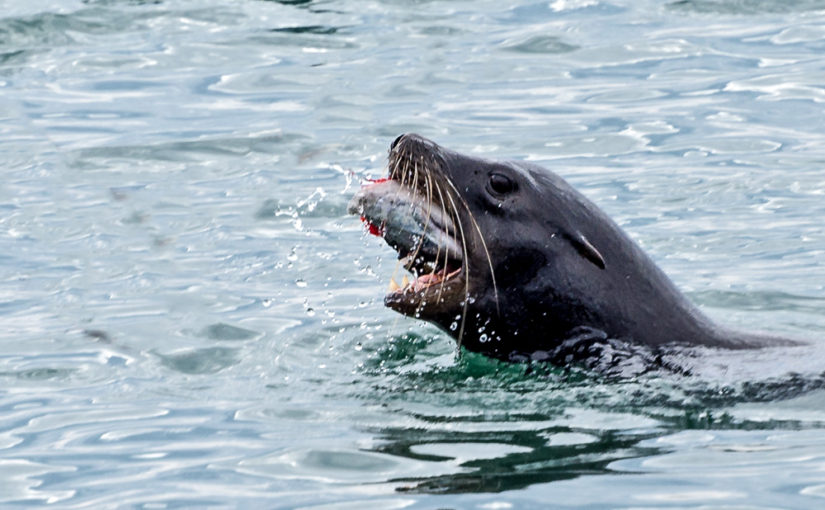 The sea lion didn’t like seagulls or photographers. It just wanted to eat fish.

The sea lion couldn’t believe his good fortune. There was a run of salmon here, just off the end of the pier. They were running so shallow he could just reach down and pick them out of the current, he didn’t even have to dive. Surrounded by the constant squawking of scavenging gulls, he was enjoying a satisfying meal.

He reached down again and grabbed another fish, jaws clenching it tightly just behind the gills. Dragging it to the surface, he shook the fish back and forth with fierce movements of his head, breaking it into pieces that flew off in all directions. Seagulls swept in for the fragments. They were careful to avoid the raging sea lion.

“Damn gulls,” thought the sea lion. He didn’t like the birds, resented them for eating half his kill. Parasites. They were noisy, and their fluttering wings made him nervous. In order to calm himself, he grabbed another salmon and ripped it to shreds.

Close to the pier there were dangers you had to look out for, he knew. Fishermen with their hooks in the water. Boatmen blindly running you down. He took a cautious look around. Up on the pier, he noticed a man running excitedly toward him. A photographer, he thought to himself. Another stupid photographer. The man’s large, telephoto zoom lens was extended to its maximum, so excited was he to see a sea lion eating fish.

The sea lion didn’t like photographers. They were annoying, voyeuristic pests. Like the birds, they were freeloaders, although he didn’t really understand what sort of thrill this guy got  from watching him eat. There were restaurants down the pier with outdoor seating. Why didn’t he go bother the people eating there? But the sea lion consoled himself with the thought that, unlike the gulls, photographers don’t steal your fish.

Which didn’t mean that they weren’t a nuisance, the sea lion considered. Photographers made him nervous: they pointed lenses at him, produced an obnoxious clicking sound, and made him feel conspicuous with their constant gawking. Cursing, the sea lion shook another fish to pieces, making sure to splash enough water around to prevent the guy from getting a decent picture.

The photographer was right up at the edge of the pier now, pointing his telephoto and clicking fervently. Maybe he’ll fall in, thought the sea lion. He turned his back on the man to frustrate him, denying him a facial shot. Then, grabbing another passing fish, he let the fragments fly in the photographer’s direction. The swooping birds will block his view, the sea lion thought to himself. The bastard’ll spend hours in Photoshop trying to get rid of them all.

Glancing back at the pier, he saw that the guy had gotten down on one knee and was leaning against a pylon to steady his camera. “What a dweeb,” thought the sea lion. “I hope he gets bird shit on his pants.” Then, he dove down beneath the surface for a few moments to see if the man would go away.

But when he surfaced, the photographer was still there. He was standing up now, stamping his feet because it was cold on the pier. But as soon as he saw the sea lion, he raised the camera and pointed it at him. In the still morning air the animal could hear the irritating, repeated clicking of the shutter.

Infuriated, he slapped at the water with his tail, hiding from the camera behind the splashed cascade. Then he dove again, abruptly cutting down through the schooling salmon.

Startled, the fish dispersed. In an instant they were gone. The birds, sensing immediately that the opportunity had passed, began drifting away toward the shallows.

The photographer was the last to realize that something had changed. But after a while he, too, turned around and walked back toward the foot of the pier.