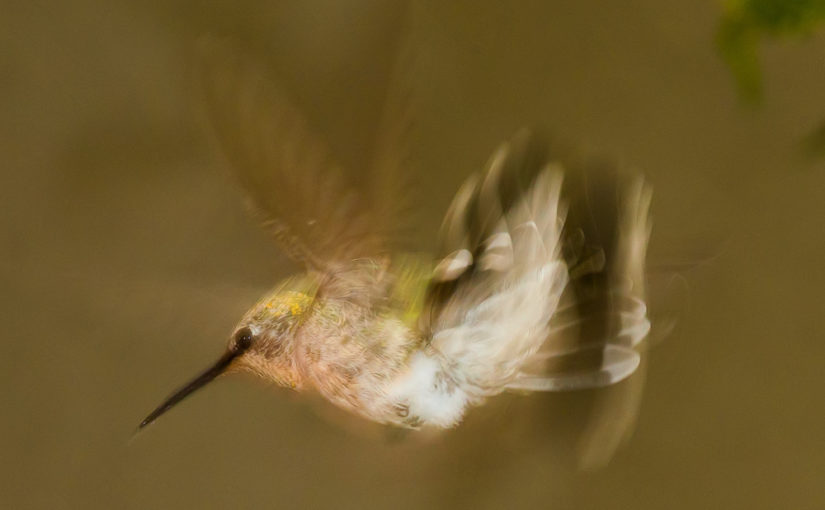 Lenny, a street photographer, is stuck at home because of the corona virus. He wants to try taking pictures of the hummingbirds that feed on the potted plants on his back deck. He wrote to ask for advice.

I did an impromptu project like this last year, while visiting my brother in law, a cannabis dealer in LA. He has a couple of hummingbird feeders in his backyard. One day, having been left alone there with enough of his wares to hospitalize Cheech and Chong, I ended up pulling out my gear and photographing hummers. I had a D600, a pretty good speedlight, and a tripod.

My first suggestion is to use a flash. Flash lighting helps to freeze the action, and it also lets you to reduce aperture to gain more depth of field. This can be useful for focusing, because the birds move so fast.

It’s nice to use a diffuser on the light to soften the shadows a bit, but that may depend on how powerful your light is and how close to the bird you can place it.

The flash freezes the action. It lasts a  tenth of a millisecond or something, at least at low power. Way faster than your shutter, so if the flash light is dominant, it no longer matters what your shutter speed is. Just set aperture for depth of field and regulate flash power for exposure. 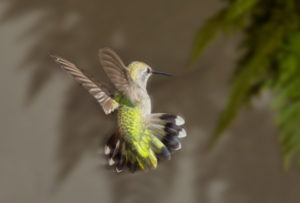 However, the more you crank up the power on a speedlight, the longer the duration of the flash (1). And hummingbird wing and tail movements are very fast. With most speedlights,  you’ll start to see wing and tail flutter if you shoot at more than 1/4th power. If you shoot less than that on a sunny day, you’ll start to see a contribution from ambient light, which may also show wing motion, depending on your shutter speed.

So, balancing flash and ambient lighting is a bit more involved than it seems at first. On top of all this, I was trying to conserve my battery, ‘cause I didn’t have a spare. I had found my brother in law’s stash, but I couldn’t find his AA cells, and I was in no condition to drive anywhere to buy more. You have to weigh a lot of factors to get good photographs.

Ultimately, I backed off on power and ended up with a blend of light sources, with some motion revealed by the ambient light. The effect is kind of artsy, I think, but different from the pin-sharp you could do with more light. Artsy is what you call a shot that falls a little short technically. It’s all in the eye of the beholder.

The birds didn’t seem to react to the flash. I was surprised at this, thinking it might spook them, but I was able to fire it again and again, and they just kept feeding.

Your flash should have a manufacturer’s guide number (or you can measure it), which is equal to the product of the distance and f-number at which your subject is fully illuminated at full power (it will be specified in meters or feet). A diffuser will knock that back a bit. How much depends upon the diffuser. You can measure that by taking pictures of your wife in the kitchen with and without the diffuser and then comparing the little histogram thingies in Lightroom.

If you don’t have a wife, or if she refuses to cook for you, you could take pictures of a grey card. This would be more precise, but possibly not as attractive.

I wanted to photograph the birds in flight, because a shot of a hummingbird sitting on a feeder is ordinary. So, I put the flash on my tripod and aimed it in the general direction of the birds’s flight path on their approach to the feeders, and then slaved it to my Nikon. Sometimes the birds would hover in front of the feeders for an easy shot, sometimes they’d just swoop right in, giving me no time to react. I handheld the camera and shot as best I could with spot focusing. 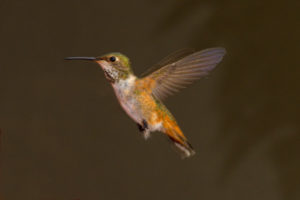 The biggest lens I had was a 200mm, so I wanted to get as close as I could. I set up about 2 meters to one side of their path. To gain focusing depth, I tried to stop down as much as possible, to f11-f16. That gave me about 10 centimeters to work with, but of course it reduced the light intake and was demanding on the flash.

I managed to milk a couple of hours of shooting from my battery, got some decent pictures and had a good time. I think you’ve picked a very good self-isolation project.

Good luck and get some good pictures! 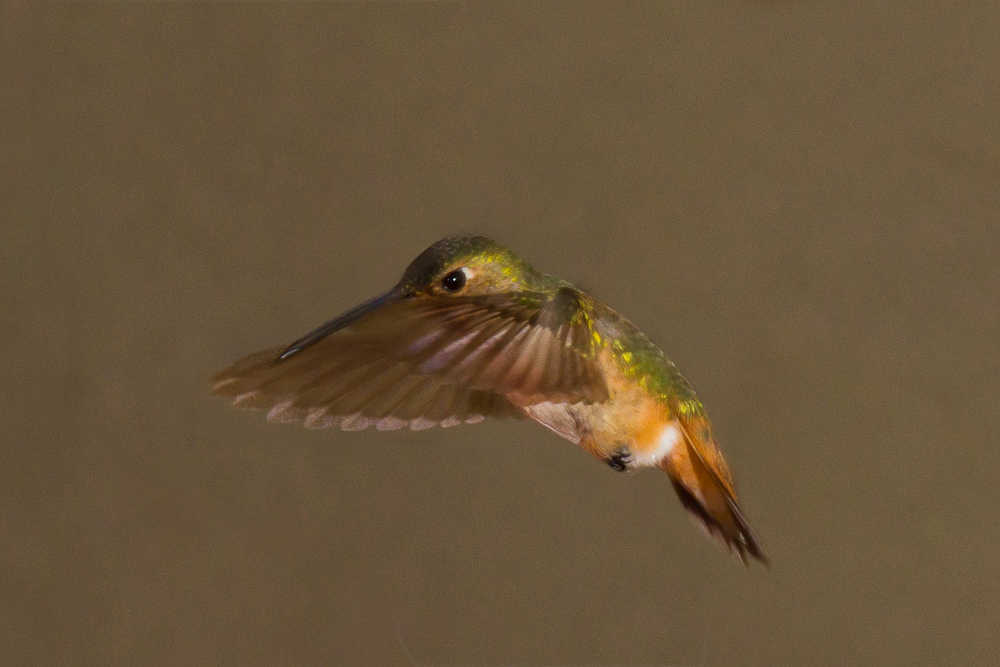