An Old Fisherman. I took a long walk down to the harbor this morning. Highway 1 was completely bare of traffic in broad daylight, something I don’t remember having seen before.

On Johnson Pier, I ran into Cary and his dog, Boda. We greeted each other from 6 feet. Cary is an old fisherman who lives on his boat, makes a living working the trawlers that put out from Princeton in the mornings. He has a long beard with little braids in it, which he twirls together. He was blonde, once.

He must have really weird working hours, usually seems to be done for the day if I come around at 9 or 10AM. He hangs around the outside tables next to Princeton Seafood, before the place opens, drinking coffee with a half dozen other guys who look just like him. Cary keeps an ancient Mercedes in the harbor lot, uses it to bring in food. And coffee, sometimes.

I watched as he and Boda climbed up the ramp from the docks to the pier. They both struggled to make the climb, Cary bent over, encouraging the dog. I thought to myself, these two will die within days of one another. Such thoughts are not uncommon, lately.

Feeling the Heat in Japan. Here, we have a shortage of masks. In Japan, where the government is sending masks to every household, there is a shortage of thermometers. With fevers being checked at home and at work, the manufacturers can’t keep up with demand. There’s a call for any unused thermometers people might have at home. If they don’t work, they probably just need new batteries.

Japan must be a really tough place for foreign workers right now. Most of them have only a rudimentary understanding of the language, can’t follow the news. And Japanese apartments can be tiny. You think you feel isolated?

The NHK news service ran an article about a government outreach for these people. It was a headline piece, illustrated with the following stunningly bad photo. I present it here without crop or edit: 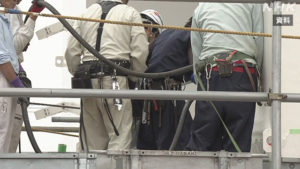 Is this the worst news photograph ever? No heads or faces, we have no idea what they’re doing. But, they do seem to be workers of some kind, foreign or not: they have tool belts and all that. The photo was clearly taken with a cell phone by the story reporter, suggesting that all the photographers in Japan have disappeared, probably plague victims. Are we photographers a high risk group for severe infection, like seniors and people with asthma? Stranger things have happened.